In Auckland, New Zealand, that Pokemon craze has recently caught on. And one day, two young boys were outside rounding up whatever characters they could from that game. Those boys were Blake Ockleston and Daniel Coyle-Smith.

The 13-year-olds were having a good time playing the game. And then, they spotted an elderly man struggling to cross the street. He was shaking as he stood with his walker, and it was obvious he was unsure of himself.

So Blake and Daniel put away the Pokemon stuff and walked over to the man. As they helped him out into the road, the light changed again. So one of them completely stopped all the traffic so they could get the man safely across the street. They then walked him across another street. But then they did something else.

Once they safely got him to the other side, they walked with him to his destination… the train station. And when they arrived there, one of the boys asked a security guard to stay with the man and help him.

A woman named Lyqueeshah Brooks spotted the boys act of kindness and posted it on Facebook. Says Lyqueeshah: “My heart is so full [right now]. These boys helped this man cross 2 pedestrians in new lynn right now .. shout out to these boys parents. If it wasn’t for them no cars would have waited for this man to cross.” 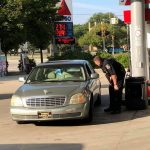 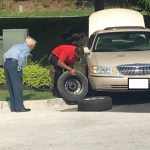